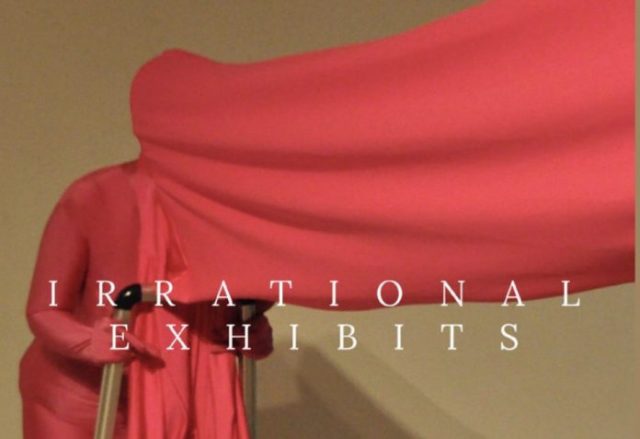 How do you view art? Do you view it through the screen, on the wall? Does your art touch you? And this isn’t meant emotionally. Does your art reach out its hands and place its skin against yours? Does it breathe? Does it look back at you as you stare? Does it force you to move your body because everything around you is in motion?

When most people think of art, they think of objects removed from the physical self — whether that is film, painting, sculpture or sound. There is a fourth wall removing the observer from the thing one wishes to interpret, creating distance. That distance is comfortable and familiar because the viewer knows how to deal with the piece, which is something frozen and inanimate.

No one’s watching you, or expecting anything from you. The environment of a museum’s static spectacles is something that viewers can easily inject themselves into and slip away from without fear of social reproach.

In her biennial show “Irrational Exhibits,” UCI professor, curator and artist Deborah Oliver challenges this familiar disposition, making the body the fundamental subject through visual and performance art. The audience must be prepared to get uncomfortable; as soon as they step into that showroom, they are immersed in a myriad of intimate spaces created by artists — colorful, unexpected and constantly changing.

“Irrational Exhibits” launched in 2001 and was inspired by Oliver’s experiences at UCI, where she began teaching in 1998. The very first exhibit took place at Track 16 Gallery in Bergamot Station, a 30,000 square foot space that allowed Oliver to create an open environment for artists to present their work.

Each group show includes anywhere from 18 to 22 artists, creating works that include sculpture, installation, the live body and sometimes a component of sound. Oliver makes sure to include UCI undergraduates, graduate students, past alumni and members of the performance art community in her shows. In search of the perfect installments for that year’s exhibit, Oliver schedules visits to emerging and established artists’ studios.

“I am looking for artists that fundamentally work with time-based work, that their bodies are engaged in a process,” Oliver said.

She says that with “Irrational Exhibits,” there is an “overlap between performative gesture and the making of objects.”

In her teaching, Oliver has always focused on putting the audience through a process, rather than on entertaining. She cares about the relationship with materiality and objects in performance, largely inspired by Gutai Art Association and the Fluxus group — avant-garde collectives formed in the ‘50s and ‘60s whose radical ideas have greatly influenced the modern understanding of performance and conceptual art.

A piece that particularly impacted Oliver is “Challenging Mud,” a performative painting by Kazuo Shiraga of the Gutai group in which the artist threw his body into a pile of mud and proceeded to shape and engage with the material. Shiraga’s piece redefined the traditional view of painting.

Like Shiraga, the works that Oliver curates in “Irrational Exhibits” challenge what is comfortable, conventional and makes for an innovative use of space — the intrusion of it, the occupation of it or the emphasis of its limitations.there is constant simultaneous action and shifting in the world around us.

The simultaneity of action pushes the audience to think “How do I grasp what I’m feeling?” and “Is someone else, somewhere else, experiencing this at the same time?”

Therefore, the audience is obliged to curate their own unique experience — in real-time, as one does in daily life — in a gallery that is constantly shifting. Audience members are put into a process and are asked to interact with performers in personal spaces.

In “Jam Lick” from “Irrational Exhibits 9: Reports From the Field,” artist Lara Salmon stood with her upper body slathered in homemade jam and invited the viewers to lick it off of her skin. Salmon used the confection as a central object in this piece, drawing inspiration from her childhood memories collecting blueberries and making jam with her mother in Cape Cod. Through jam, body and human contact, Salmon reported on these distinct memories.

Salmon’s works typically utilize “personal biology to create an intersection between physical vulnerability and the politics of connection,” as made apparent by the trusting vulnerability she displays in “Jam Lick,” which pleads with the viewer to make contact and show equal vulnerability.

The exhibits are largely about “practicing otherness,” Oliver said.

The theme of the latest installment of “Irrational Exhibits” was “Place-Making and Social Memory,” held in the Bendix Building in Los Angeles in 2019. With this show, Oliver posed the question “How does one fit into a community, and how does that affect belonging?” Whether it’s a contemplation on gender, sexual or cultural identity, the show displayed just how different artists brought their identities into a new place, created connections and ultimately spaces for themselves.

“Irrational Exhibits” is a place where bodies are encouraged to meet and understand each other. However, since March 2020, circumstances have changed.

Human contact and shared space are now dangerous and feared. Although Oliver would have liked to hold the next “Irrational Exhibits” in fall 2021, she is planning on pushing the show to spring 2022 in the hopes that COVID-19 will no longer prevent performances from going live.

In addition, Oliver has started exploring digital media, keeping an eye out for artists who not only make performance-based work with their bodies, but also work with video.

The pandemic has fundamentally changed how Oliver, and all educators, interact with their students. In response, Oliver is constantly trying to innovate new ways to keep her students engaged, especially in courses revolving around the physical body and performance as a subject.

During the past year, Oliver spent much of her time doing archival work, creating a comprehensive catalog of all the “Irrational Exhibits,” spanning from 2001 to 2019.

“I love having work on my website so the audience can see that there’s a trajectory,” Oliver said.

Oliver showcases work from former and current students under the “Student Work” section on her website.

One video titled “Self Portrait” by Jiawei Chen shows the student standing in pitch blackness, her thoughts narrated as a voice-over. Chen describes a moment so tender and beautiful that she wished that “time would freeze.” The performance points to loneliness and the subjective nature of shared experiences — how a moment can be beautiful to one person and miserable to another, despite perceived intimacy between the individuals.

The “Student Work” section also spotlights video pieces created during the pandemic in fall 2020, in which students express their impressions of this time of isolation and uncertainty through videotaped performances.

In one video titled “20 Seconds,” student Nicholas Grant compulsively washes his hands stating “20 seconds … and the problem goes away,” representing pandemic anxieties and the desire to control the situation — to believe everything will be alright if he does this one thing.

Although the artist cannot reach out and physically touch the viewer, perceive the audience, nor force them to move their bodies in the work that Oliver’s students are producing this year, students are finding ways to work around the confines of COVID-19 in isolation. These works and many other interpretations of this current period will be included in her show “Irrational Exhibits 12,” set to take place in spring 2022.

Jacqueline Lee is an Entertainment Intern for the Winter 2021 quarter. She can be reached at jacqusl4@uci.edu. Read Original Article